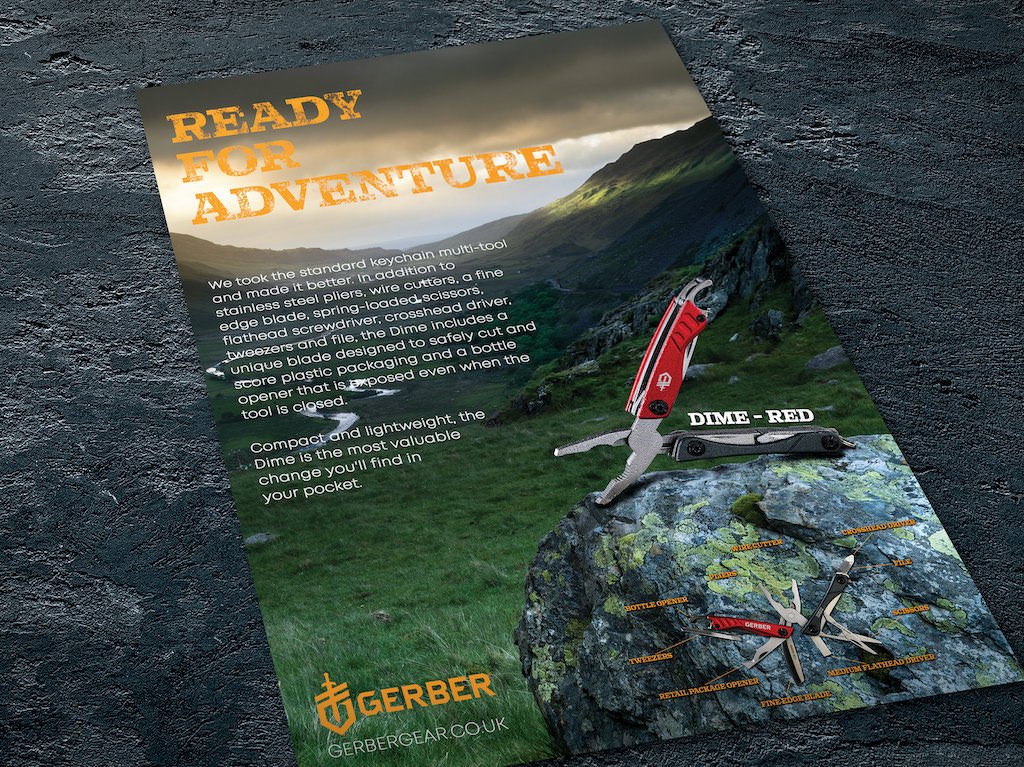 Photography and design done in studio to create a finished advertisement.

How did we go about it?

We started with vision creation and conveying the message of Adventure. As the ideas came in thick and fast, the final image started to form.

{There is a BTS (Behind The Scenes) Video below which shows all of the following process.}

From this point, we started the first step which was to photograph the Gerber DIME – Red in two shots. The first was on top of a rock which we could superimpose into a landscape scene and the second was suspended by invisible wire, with all the tools out.

We then looked for a landscape background which, on a normal shoot, we would go and photograph if it wasn’t available to buy on stock, but we were lucky enough to have the perfect shot within our own image library and, for the icing on the cake, it already had a rock in the foreground.

We then cut out the Gerber DIME – Red, so that it could be superimposed onto the landscape background, and touched up any minor imperfections. Once in place, fake shadows were added plus the additional text for the advert.

For the main title, a font was just not going to be enough to make this sit on the page and stand out, so the finished font was edited to have cut outs in it, to make it more rough and ready and look like it was meant to be there – clean and pristine was not going to cut it for this type of advert!

Once the main advert was done, samples were placed into scene sets to visualise what the advert might look like out on the street or in a magazine.

BTS Video (Behind The Scenes)

WE ARE PROUD TO HAVE WORKED WITH THE FOLLOWING:

How to find the Worcestershire Filming Studio

Our 3 word address is ///certified.aura.cost

Send us an email

Send us a message